Hearts are not to be had as a gift, hearts are to be earned.
William Butler Yeats

Three years ago we visited Ireland. I fell in love. In love with a countryside so spectacular it takes your breath away. In love with the people whose melodic, lilting accents had me so fascinated that I stared at them in a rather creepy manner. In love with a people who knew how to laugh and celebrate.

Ireland has gifted our globe with a fascinating history. It has also produced some of the finest poets. Irish poetry has developed distinctively from the 6th century, to Jonathan Swift in the early eighteenth century, to contemporary poets such as Seamus Heaney.

It is a poetry that has been shaped by the struggle to define Irish identiy. Irish poetry has a history of two languages: Irish and English, richly interwoven. The Irish language has the oldest vernacular literature and poetry. In the middle ages, the Gaelic order that supported some of the old professional bards, broke down. This resulted in the Irish language becoming marginalised and entering the realms of folk art. However, in the 19th century, Irish poets set out to reinvent the Gaelic tradition in the new language. The best example of this is the early work of W.B. Yeats.

Several years ago the Irish Times surveyed its audience and asked for their favourite poets. The top two were W.B. Yeats and Seamus Heaney. So here are some samples of these famous poets … I have also included one of Oscar Wilde as I found this poem so beautiful. If you have never tried to read poetry, this is probably the best place to start. Feed your soul, read it slowly. 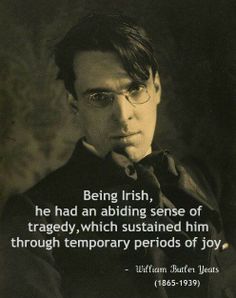 When You Are Old
By William Butler Yeats

The trees are in their autumn beauty,
The woodland paths are dry,
Under the October twilight the water
Mirrors a still sky;
Upon the brimming water among the stones
Are nine and fifty swans.

The nineteenth Autumn has come upon me
Since I first made my count;
I saw, before I had well finished,
All suddenly mount
And scatter wheeling in great broken rings
Upon their clamorous wings.

I have looked upon those brilliant creatures,
And now my heart is sore.
All’s changed since I, hearing at twilight,
The first time on this shore,
The bell-beat of their wings above my head,
Trod with a lighter tread.

Unwearied still, lover by lover,
They paddle in the cold,
Companionable streams or climb the air;
Their hearts have not grown old;
Passion or conquest, wander where they will,
Attend upon them still.

But now they drift on the still water
Mysterious, beautiful;
Among what rushes will they build,
By what lake’s edge or pool
Delight men’s eyes, when I awake some day
To find they have flown away?

(William Butler Yeats was the most famous Irish poet of all time. “The Wild Swans at Coole,” is surely one of the most beautiful poems ever written, in any language.) 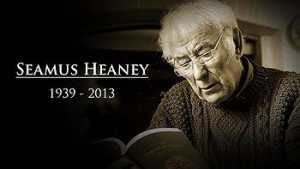 When All the Others Were Away at Mass
By Seamus Heaney

When all the others were away at Mass
I was all hers as we peeled potatoes.
They broke the silence, let fall one by one
Like solder weeping off the soldering iron:
Cold comforts set between us, things to share
Gleaming in a bucket of clean water.
And again let fall. Little pleasant splashes
From each other’s work would bring us to our senses.
So while the parish priest at her bedside
Went hammer and tongs at the prayers for the dying
And some were responding and some crying
I remembered her head bent towards my head,
Her breath in mine, our fluent dipping knives –
Never closer the whole rest of our lives.

(Seamus Heaney (13 April 1939 – 30 August 2013) was a poet, writer and lecturer from Northern Ireland. This poem is taken from Clearences, a sonnet sequence which he published in 1987 on his mother’s death.) 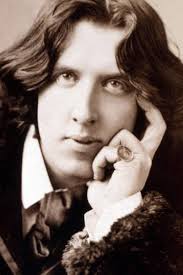 Tread lightly, she is near
Under the snow,
Speak gently, she can hear
The daisies grow.

All her bright golden hair
Tarnished with rust,
She that was young and fair
Fallen to dust.

Lily-like, white as snow,
She hardly knew
She was a woman, so
Sweetly she grew.

Coffin-board, heavy stone,
Lie on her breast,
I vex my heart alone,
She is at rest.

Peace, Peace, she cannot hear
Lyre or sonnet,
All my life’s buried here,
Heap earth upon it.

(Born on October 16, 1854 in Dublin, Irish writer Oscar Wilde is best known for the novel, The Picture of Dorian Gray and the play, The Importance of Being Earnest. Sadly, he was arrested and imprisoned. His crime? Being gay. He died shortly after his release).

You don’t love someone for their looks, or their clothes, or for their fancy car, but because they sing a song only you can hear.
Oscar Wilde 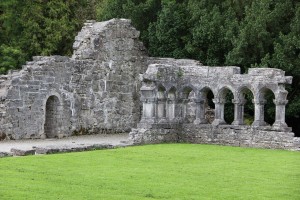