Elderberry Soup with Semolina Dumplings! Just the thought makes my mouth water and evokes childhood memories and nostalgia. This was a staple dessert during Elderberry season, whilst we lived in Germany. Elderberry picking was a compulsory past-time and my grandmothers would process this precious purple berry for both culinary and medicinal purposes. No one complained about taking Elderberry syrup as a medicine against cold and flu. Sadly, I find this highly nutritious fruit remains somewhat neglected and overlooked on our sunny continent. So allow me to share some Elder wisdom. 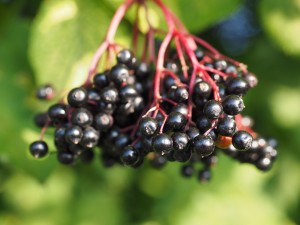 This tree was once considered sacred and linked to the ancient vegetation goddess, Hylde Moer. It was believed that the Elders were inhabited by tree dryads, who were benevolent if properly cared for. So Elders were planted around homes as people sought protection from witches and evil spirits. To cut down an Elder tree, in order to process it for the many medicinal uses, permission had to be sought from the tree dryad: “Lady Ellhorn, give me some of thy wood, and I will give thee some of mine when it grows in the forest.” With the rise of Christianity, tree worship was forbidden, and the Elder tree was depicted as a tree of sorrow. The narrative changed to imply that it was an Elder tree from which Judas hung himself and it was Elder wood that was used to make the cross on which Jesus died.

Many herbalists would consider the Elder as one of the most useful plants. Modern medicine is rediscovering this potent plant. Elders were listed in the Handbook of Medicinal Herbs (CRC Press) in 1985 and in the 2000 Mosby’s Nursing Drug reference for colds, flu, yeast infections, nasal and chest congestions, and allergies. The Hasassah Oncology Lab in Israel is using the plant to treat cancer and AIDS patients as it stimulates the body’s immune system. Further studies at the Bundesforschungsanstalt in Karlsruhe, Germany, show it is so effective against disease because it boosts the body’s production of cytokines; a unique protein that helps regulate immune response. Elderberry extract also reduces oxidation of low-density (LDL) cholesterol, and therefore has been effectively used to combat high cholesterol. Hippocrates reportedly referred to the Elderberry bush as his “medicine chest”. 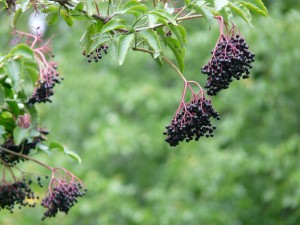 The Elder is officially known as Sambucus, a species that comes as tall shrubs and small trees, and is part of the Honeysuckle family. Most species of Sambucus are edible when ripe and cooked. However, most uncooked berries and other parts of the plant are poisonous. Sambucus nigra, the one I have planted and is flourishing in my garden, is the variety considered to be non-toxic, even when not cooked, and is most often used for health benefits. Several species are native to North America and Europe. The Black Elderberry (Sambucus Canadensis) is the one used by many Native American tribes: “Used traditionally in Native American herbalism, Elderberry has been used by many tribes as a tonic medicine and food to promote health and vitality, as well as to fight pain and swelling. Used to clear lungs and ease breathing and to fight rheumatism. The flowers and berries of the Elder plant are now being researched as herbal remedies for bacterial sinusitis, bronchitis, high cholesterol, and management of the flu.”

Every part of the Elder tree can be used. I pick the flowers and infuse it into a tea. People also use the infusion in bathwater and as an eyewash. The leaves can be turned into an ointment, treating wounds and bruises (even haemorrhoids). The berries are delicious and there are many recipes that are dancing with goodness. The bark and branches have served in dyes, tool-making and insect repellents. If, for whatever reason you cannot plant Elders in your garden, or you don’t have a garden, don’t despair. I order dried, organic Elderberries online and make the soup out of that. The trees in my garden are still growing and developing. 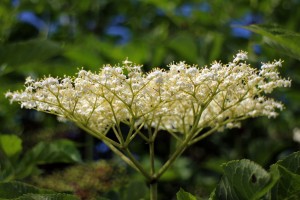 Like any plant that is used for medicine or culinary purposes, caution needs to be applied. Please inform yourself about allergies and side effects. Elderberries are not recommended for pregnant or breastfeeding women.

So, why not listen to the wisdom of Elders and try something new that comes with excellent health benefits? I respectfully disagree with zee French Soldier in the Monty Python’s Holy Grail. King Arthur was quite right in asking whether there was someone else he can talk to up there. To have your father smell of Elderberries, is after all, not really an insult! 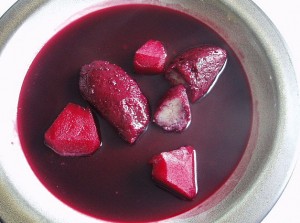 1 thought on “The Wisdom of Elders”