Skip to content
“Even eaten raw fennel does not harm the body in any way. In whatever form one eats fennel, it makes us happy, gives us a good skin colour and body odour and promotes good digestion.”
– Hildegard – 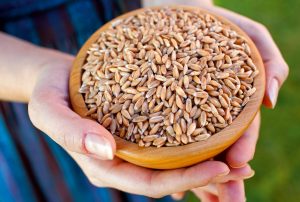 Fennel was a regular star in the meals consumed in my childhood. To this day I can identify it blindfolded, simply by its unique, slightly sweet taste. It is also somewhat of a divisive culinary accompaniment, a bit like coriander. People such as my parents and grandparents were devoted to this humble vegetable, while others refuse to allow it anywhere near their kitchen. But there was one historical figure who swore by fennel – and her love affair was recorded in the annals of history.

In the fertile, temperate Rhine valley, near the River Main, a convent of Benedictine nuns became the focal point of many religious devotees in the Twelfth Century. Hildegard of Bingen (1098-1179) remains somewhat of an historical phenomenon to this day. Her many visions and knowledge about the meaning of Scripture drew the attention of people such as St. Bernard of Clairvaux and the Pope himself, Eugenius (1145-1153), who read her writings to a synod held in the German city of Trier. It did not take long for the news to circulate that a prophetess was living in Disibodenberg. You can read more about her remarkable life here. 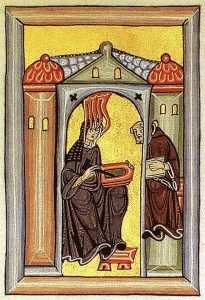 Hildegard may well have been Germany’s first nutritionist and produced writings on medicine, science and the healing power of nature. She saw fennel as one of the most important plants for achieving physical wellbeing. It is excellent, she wrote, for the eyes, brain, hearing and heart. Eating fennel makes one happy. Her applications for fennel were numerous:

– For puffy eyes, place 2 tsp of roasted fennel seeds or ground fennel seeds in hot water, let steep for 5 minutes or more. Once cool enough to touch, dip the corner of a folded paper towel in the solution and apply to the under eye region.

– For heartburn, bloating and gas, eat a pinch of roasted fennel seeds immediately following a meal. 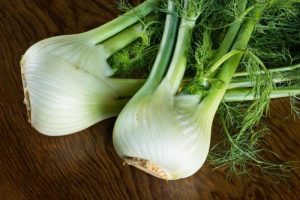 Fennel belongs to the Umbellifereae family, second cousin to parsley, carrots, dill and coriander. It contains a unique combination of phyto-nutrients that allow for strong antioxidant activity. Research has found that one of it’s most interesting phyto-nutrient compounds is anethole. Anethole has reduced inflammation and prevented the occurrence of cancer. It has shown to be able to protect the liver from toxic chemical injury. The high Vitamin C content in the fennel bulb is anti-microbial and needed for the proper function of the immune system. It is also a great source of fiber, folate and potassium.

Fennel has also been called the pearl of aphrodisiacs. A recent concoction of fennel seeds, liquorice root and water was named the ‘tonic for happy lovers’ (yes, I know, you will all rush to brew this now!!). It holds benefits for lungs, liver, pancreas, spleen, kidneys and to help dissolve kidney stones. One of its main historic uses was to cure issues surrounding indigestion. In short – fennel is fantastic! Why aren’t we all in love fennel?!

I find it surprising how many people shake their heads at things they have never tried. Over the years we have had countless people around our dinner table. Herbs and vegetables have been the ones regarded with the greatest suspicion by many. Of course, I understand that once tasted some may decline delicious vegetables or salads because of poorly-evolved, artificially-sabotaged taste buds, but at least give it a go. Shock horror – it may even improve your health!

You may never develop a love affair with fennel like Hildegard did. However, you could discover in fennel a friend that has been sent to make you feel happy! Here is to health, and cheers to a beautiful earth that graciously shares with us her fennel friend.

“There’s fennel for you, and columbines; there’s rue for you; and here’s some for me; we may call it herb of grace o’Sundays.”
– William Shakespeare (Hamlet) – 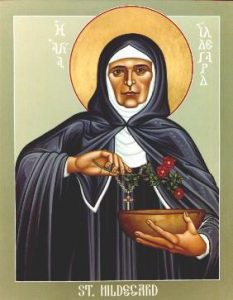