“Their aspect is terrifying … their hair is blond, but not naturally so: they bleach it, to this day, artificially, washing it in lime and combing it back from their foreheads. They look like wood-demons, their hair thick and shaggy like a horse’s mane. Some of them are cleanshaven, but others … shave their cheeks but leave a moustache that covers the whole mouth and, when they eat and drink, acts like a sieve, trapping particles of food … The way they dress is astonishing: they wear brightly coloured, and embroidered shirts, with trousers, called bracae and cloaks fastened at the shoulder with a brooch. These cloaks are striped or checkered in design, with the separate checks close together and in various colours. They wear bronze helmets with figures picked out on them, even horns … while others cover themselves with breast-armour made out of chains. But most content themselves with the weapons nature gave them: they go naked into battle … where weird, discordant horns were sounded, deep and harsh voices, they beat their swords rhythmically against their shields.” 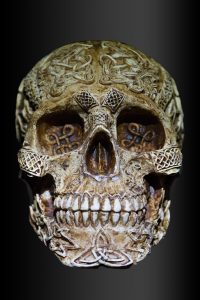 The Romans and Greeks called the Celts ‘barbarians’. The Celts were a collection of tribes with origins in central Europe who were loosely tied together because of similar language, religious beliefs, traditions, and culture. The Gaels, Gauls, Britons, Irish and Gallations were all Celtic people. They were already in Britain by the 5th century B.C., and in Ireland by the 2nd. Although they were not centrally governed and consisted of diverse tribes that were quite happy to kill each other (!), they maintained the same artistic tradition which is characterised by the use of distinctive flowing lines and forms. They also introduced iron working to the British Isles.

The concept of a ‘Celtic’ people is somewhat of a modern romanticised idea. The ‘Celts’ themselves would probably define themselves slightly different to our understanding and definition of them today. And the Roman writings on the Celts was often a means of political propaganda. It was expedient for the Romans to paint the Celts as ‘barbarians’ and themselves as ‘civilised’ … not much has changed looking at our world leaders today… but I digress!!!

The Celts lived in clans, who were loosely bound together into tribes. These tribes all had distinct social structures and customs, their own coinage and deities. They lived in huts that were gathered in hamlets. When they were not fighting, they were farming – and one of their contributions to Britain was the iron plough. Art was very important to the Celts, and they were also master storytellers. Bards and poets played a central role in passing culture and tradition to the next generation. 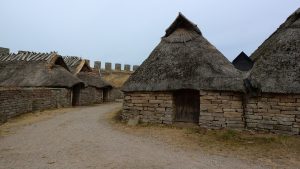 The curious Druids were important to the Celts. They were a form of ‘super priest,’ who also became political advisors, teachers, and healers. They were revered and could interrupt a king as they held more authority. The druids also played an important part in the rich oral tradition. 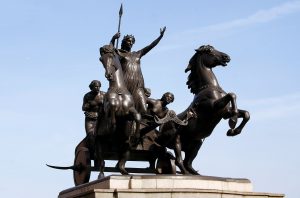 And the Celtic women? Well, you wouldn’t want to mess with them. Boudicca, King Prasutagas’ widow, did not take kindly to the Romans’ attempt at taking over Iceni lands when her husband died. She raised the Trinivantes tribe in revolt … and the Romans? … They were terrified. Boudicca provides an insight into the life of Celtic women – they could be war leaders, choose their own husbands, and own land. Very different from the treatment of women by other societies around them.

The Celts loved a good fight. If there wasn’t one, they started one! As Diodorus points out, they took great care in ensuring their appearance would provoke fear in the hearts of their enemies. They took a liking to the heads of their enemies, which they considered had great spiritual powers. So they adorned themselves and their homes with their enemies’ heads as if they were Christmas ornaments.

Christianity was introduced in Ireland around A.D. 431 with Pope Celestine sending out Palladius to some Irish believers (in all probability this community evolved through contact with Christians of Western Britain) as their first bishop. We often hear about the radical changes that Christianity and people like Palladius or Patrick brought to the Celts, but that is actually not the case. Celts and their sacred places and practices simply made room for Christianity. Many druids became Christian, and many of the churches and monasteries had some pre-Christian connection. The Celts were not ‘revolutionised’ by Christianity; instead, it was so readily accepted because there were so many similarities.

Hundreds of years later there is a romanticism around Celts and Celtic Christianity. We need to recognise the danger of putting words in the mouth of history. However, there are many things about the Celts and their connection to faith and spirituality that can inform us today. Here are a few:

1. Their love and respect for nature and God’s creation.
2. Their love for hospitality and welcome.
3. Their recognition of women as equal.
4. Their spiritual disciplines that included solitude and service to the community.
5. Their love for art and poetry – illuminating the Gospel with their creative genius.

I am personally drawn to the Celts spirituality and how they expressed this connection with God. There is a verse in Colossians 1:17 that to me sums up their understanding of the person of Christ – “He is before all things, and in him, all things hold together.”

In May 2019, Mark and I are planning to lead a group of people who are also interested in the story of the Celts through Ireland, Scotland, and England. We can’t wait. Maybe you’d like to join us? Please see this link for information.

I will finish this post with a quote from Ray Simpson … whom you will meet if you decide to join us:

“Contemplative prayer is natural, unprogrammed; it is a perpetual openness to God so that in the openness God’s concerns can flow in and out of our minds as God wills.” Ray Simpson, from Exploring Celtic Spirituality.