Faith is a dynamic and ever-changing process, not some fixed body of truth that exists outside our world and our understanding. God’s truth may be fixed and unchanging, but our comprehension of that truth will always be partial and flawed at best. – Bishop Gene Robinson –

Dear reader, please be aware that this blog post is the third and final instalment of Questions in the Desert, a continuation of Part One and Part Two …

3. “About whom, may I ask you, does the prophet say this, about himself or about someone else?”

Was it mere coincidence that the Eunuch was reading from Isaiah 53?

Isaiah is a book written by a Jewish prophet and part of the Tanakh, the Jewish Scriptures. This, in and of itself, is mildly fascinating, in that the Eunuch continued to search the Scriptures, looking for meaning, despite having been rejected at the Temple.

There is something more interesting, however. The passage he is reflecting on is the last of the four “Songs of the Suffering Servant” and it tells the story of a “Man of Sorrows”. People throughout the history of the church have understood this passage as prophesying the coming of Jesus: the One who was to be the “Suffering Servant”.

Importantly, this passage, immediately before the part read by the Eunuch, describes this coming Servant – who we now understand as Jesus – as physically marred and then rejected by the Jewish people.

So as the Eunuch speaks to Philip, you can imagine the urgency in his voice: “About whom, I ask you, does the prophet say this, about himself or about someone else?” … Who is this man who, like me, is physically marred and rejected? Is it the writer? Is it someone else? Is this about me?

Here the yearning heart of an outcast is being reflected in the prophet Isaiah – who shows him that the Saviour of the world, was an outcast like him. Rejected by his own people, rejected by the fine religious institution of his day, he too was wounded and mutilated.

I wonder what Philip said to him. Maybe it was something like this: “What you are reading is about a man named Jesus, who, like you, pursued God. In his pursuit, he, too, went to the Temple, and he, too, was rejected. But this was no ordinary man. This was God made flesh. This God of the universe knows your story, the story of being outcast, of being refused from the place of worship, and God came into the world to show that the God of the universe is not defeated by rejection, even rejection unto death.”

Philip helped the Eunuch understand that the Scripture he was reading demonstrated how God was already at work in his life. Like a “Join the Dots” game, Philip simply brought God, who had always been with the Eunuch, just like God is with each and every person, to the forefront of the Eunuch’s conscious recognition.

Many of us remember that moment in life when we “awaken”,  our “dots are joined”, and we realise that God has always been at work in us. We have simply been unaware!

I wish we were privy to the whole conversation between Philip and the Eunuch. Suffice to say, that the conversation and interchange of questions and answers brought them both to an “aha!” moment. That moment when the lights went on.

Imagine this moment for the Eunuch, a man who has only known rejection. He wore a stigma and knew ridicule from every social sphere: in his culture, in the religion he was trying to pursue, in his role, in his political positioning – everything about him reminded him every day that he did not belong.

And then Philip shares the Gospel. The Gospel that declared him as accepted, loved and included. This man would have no comprehension of what that would be like: to be equal amongst people of faith. This was not the rhetoric of some narcissistic platform personality begging for money, or an angry street “preacher” with a megaphone. This was what the Gospel should always be – wonderful and exceedingly exhilarating Good News. No wonder he saw a puddle in the desert and said, “Water! Why can’t I be baptised?”

And then there’s Philip! Perhaps at some point, he took a big gulp, laid aside his exclusive religious ideals and took a leap of faith! Faith that the Gospel is greater than his paradigms, ignorance and cultural stigmas. We forget that for Philip this is a whole new journey that has taken him totally out of his comfort zone. He realises as he goes to the water with the Eunuch that this will not be a popular move amongst his Jewish friends, and even amongst the Messianic Jews who are still getting their head around the fact that God is bigger than the boundaries of their religion.

The Samaritans were a huge step for Philip. This will take him to a place of no return – he either believes the Gospel is as glorious and scandalous as he has preached, or he returns to the confines of a law-based tradition and acceptance.

And again Philip astounds us with his courage – he takes the step and goes to the place of no return. He baptises the Eunuch. In Philip, God has found a faithful messenger.

And here end the questions in the desert – and for once in the Bible, it has a similar end to fairy tales.

When they came up out of the water, Philip disappears, and that was the last the Eunuch saw of him. But he didn’t mind. He had what he’d come for and went on down the road as “happy as he could be” (Message Bible).

I love that – as happy as he could be. A man who never really understood love was now amongst the beloved. A man who had only known exclusion was now included. A man forever on the outer was now in the inner circle. He was equal, he was accepted – no matter what his future held, he was in Christ, and for him, that was all that mattered.

I wonder how people leave our conversations? Do we leave others as “happy as they could be”?  When we walk away are they a little closer to recognising God at work in their lives? A God who loves them immeasurably.

“Define yourself radically as one beloved by God. This is the true self. Every other identity is illusion.” – Brennan Manning – 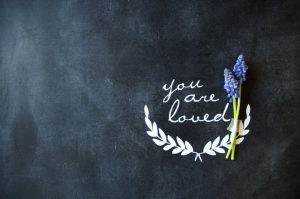 6 thoughts on “Questions in the Desert – Part Three”