“Every Path has a Puddle!” – George Herbert 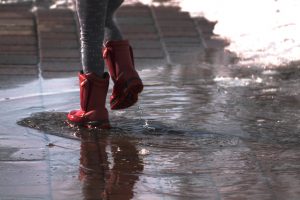 A few days ago my fur children and I were on our routine jaunt to the beach. It is always at a brisk pace as there is nothing more fun on Planet Earth than for the lab and the pug to plunge into the waves. So they attempted to get to the water as fast as possible, dragging their human behind them like an odd pair of sled dogs. It had rained heavily the night before, and the bumpy road and sidewalks displayed a vast array of all shapes and sizes of puddles. Now, puddles are also very close to the heart of my dogs, especially the labrador who tries to submerge himself into their shallow murkiness in the hope of who knows what!

As we came around the last corner before the beach, where the street slants ever so slightly and creates a dip on the side of the road, there it was before us … the mother of all puddles. It stretched for several meters, like a mini lake, and the lab whined with sheer joy at such a glorious sight. At that moment the clouds parted and just for a few seconds heaven was in that puddle. The sun, the clouds, and the bright blue sky admired themselves in the water-mirror on the road. And then, as quickly as they came, the heavenly display was gone, and we stood at the edge of a muddy puddle in the greyness of the day.

As I waited for the labrador to stop pretending that he was a living submarine I looked up. There was no clue of the sunshine or the blueness of the sky that had appeared in the puddle. Just dark, menacing rain clouds. But I was not fooled – I had seen heaven in a puddle – a deep azure sky and a glittering sun that shines beyond the temporary weather patterns.

Sometimes life is like that mud puddle. The truth is that for some folk, labouring in a world that often groans with insidious injustice, their whole life is a puddle – here today, gone tomorrow and forgotten. All cliches and memorable quotes put together cannot change the heartbreaking existence for many people. For others, life holds puddle-seasons. I wish it wasn’t so. I wish every child born would live a life beholding and grasping the beauty of vast oceans, crashing waves and endless beaches. But that is not yet a reality.

So we often live our lives in light of puddles – muddy, murky, messy, shallow and bedraggled. How easy it is to tell our stories and shape our reality by mud and grime, but that is not the whole story. It is just part of the story. The very puddle that holds contaminated slop is also able to hold the sun, moon, stars, billowing clouds and eternal blue heavens that hide light-years and galaxies. Now and then, like thin places and portals, our puddles become mirrors to another dimension, another way of seeing. And once you see you cannot ‘un-see’ … your story begins to change…

As the dogs and I kept walking to the beach, I stared at another puddle, and I saw my face in it. Scientists now tell us that humans and their galaxy share about ninety-seven percent of the same kind of atoms. The idea that we are stardust is not ludicrous at all. “It’s a great human-interest story that we are now able to map the abundance of all of the major elements found in the human body across hundreds of thousands of stars in our Milky way,” says Professor Jennifer Johnson from Ohio State University. It is indeed a great human-interest story. It changes our way of seeing … it changes the way I perceive the face that is staring back at me from the puddle … it changes our story. Our little puddles begin to hold galactic possibilities of the now … and the not yet. 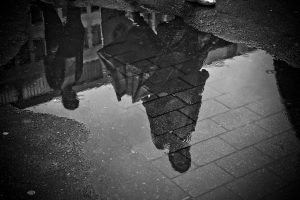 According to Sacred text, thousands of years ago a man called Jacob had a puddle moment. He suddenly saw what was already given, unbeknownst to him, and exclaimed his surprise. My prayer for you, dear friend, is that you would have Jacob’s eyes as you contemplate the divine and the star clusters in the puddles of your life. 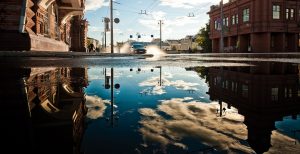 “Some people could look at a mud puddle and see an ocean with ships.” – Zora Neale Hurston