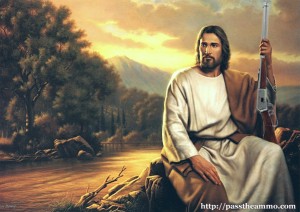 I spent the first seven years of my life in a small village in Northern Germany. It was the sort of place where everyone knew each other and the children roamed the streets like herds of sheep. You had to be tough in those herds! Children aren’t always as nice as we like to imagine. My last resort when things got hairy was to remind everyone that my dad lives just a few houses away and he will sort out anyone threatening his daughter’s well-being. That normally did the trick. Dad was respected and no one liked the idea of having an angry German-Russian breathing down their neck. Of course, to my utter disappointment, the times dad did show up and I tried to dob on someone I perceived a threat to the welfare of the community, dad would be as kind and pleasant to the wee human as he could. I remember being furious. Dad was supposed to be on my side!
Several decades later, it occurs to me how hard it is to grow out of this. We simply change the ‘dad’ figure to reason, physical strength, positions of power, or ‘God’. If you conduct a brief search throughout the corridors of human history of wars fought with strong religious ideals, you will discover a common thread: each blood-lusting party had the novel idea that God was on their side. There seems to be a ferocious zeal that overcomes those who believe that the Divine is blessing their violence. As Blaise Pascal dryly commented, “Men never do evil so completely and cheerfully as when they do it from a religious conviction.” 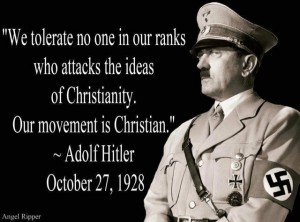 Those of us who would consider ourselves people of faith may recoil at the idea of thrusting a spear through an opponent’s heart in the name of God, or of terrorising villages and families in order to execute a ‘just’ war on terror, but perhaps we have other ways to vilify those we deem as an ‘enemy’, a ‘threat’, or simply people who have differing views from us. If we can insinuate that we have ‘God on our side’ then there is a high chance that the masses will ‘ooh’ and ‘aah’, and that they will follow our cause without engaging in critical thinking. If we really want to drive a point home, we can ensure that people understand that our idea has God’s backing.
Positions of political and religious influence can be precarious places. These platforms provide all the necessary ingredients for deception, greed and power, which can corrupt hearts. When we adopt a ‘Joan of Arc’ persona and use sentences like “God told me”, we are using our influence, in whatever capacity, with the danger of engaging in control and manipulation – possibly with the best intentions, but still potentially dangerous. No amount of ‘scriptural backing’ gives us the right to put people in such a position that if they question us, they question God.
History should serve as a teacher. Take a moment to consider just a few of the many examples like the Apartheid ideology undergirded by the Dutch Reformed Church, the long history of Anti-Semitism in the Catholic church, the Spanish Inquisition, the Religious Wars of Ireland, the exuberant preachers of the pro-slavery era, the modern day ‘Kill the Gay’ bill enthusiastically propagated and supported by Religious Leaders from the USA, or the horrendous consequence of banning contraceptives in Africa and other parts of the world. We need to consider the wake of destruction that often accompanied ideologies and people of power who claimed God on their side – be it Presidents, dictators, Popes, priests or ministers.

The moment our idea of God paints us as the ‘Messiah’ to liberate the misguided, evil ‘Other’, we come dangerously close to creating a ‘God’ in our own image, who looks and thinks like us. I would urge us to exercise caution before we marginalise and label those who differ. Many of the dogmas that were held with such certainty in a previous era, are now considered fallacies. Perhaps most confronting is the notion that what often irritates us in others is mirrored in our own shadow side. “Everything that irritates us about others can lead us to an understanding of ourselves,” said C.G. Jung. The French writer, Vauvenargues, responds: “We discover in ourselves what others hide from us and we recognize in others what we hide from ourselves.”
It is a terrifying thought that God stares back at us from the eyes of our ‘opponent’ … 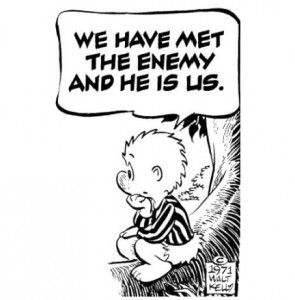