“If bees didn’t exist, neither would humans” – Dr Reese Halter 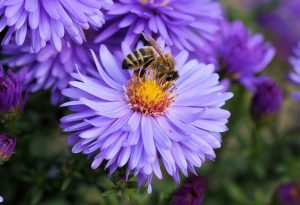 I have memories of warm summer days in Northern Germany with my mother handing me a juice with a warning – “Make sure you don’t swallow a bee!” Bees seemed to be buzzing everywhere around the tumbling wildflower and fruit tree garden that surrounded the ancient thatched roof house that we called home.

After our move to South Africa, we were introduced to the more aggressive and industrious African bee who would follow me when I was walking home from school after having purchased a granadilla ice cream. The more docile Cape bee is also native to South Africa but hardly ever came calling in our area.

Bees may have been around for over 130 million years. The oldest bee evidence is one that became mortified in amber about 80 million years ago – a type of stingless bee, similar to those living in South America. Bees evolved from wasps which remain predators to this day. All bees feed almost exclusively on nectar and pollen. They have become adept at feeding on flowers by developing a hairy body which helps them brush pollen from the flowers and to hold it while still in flight. We have identified around 1.4 million species of bees, 250 of these are bumblebees.

It is easy to take this beautiful creature for granted. However, bees are vital for human survival. Bees pollinate over a third of everything we eat. Around 400 different types of plants need bees and other insects to pollinate them. They also make an important and irreplaceable contribution to the eco-system around the world because so many living creatures feast on plants that bees pollinate. They are the guardians of the food chain!

The bad news is that bees are dying in dramatic and frightening proportions. In the USA, the number of honeybee populations has declined by a third in recent years. In some places, such as regions in China, bees have been completely eradicated. In Central Europe, the bee population has declined by 25 percent over the last 30 years. “A third of everything we eat would not be there if there were no bees,” according to award-winning film More Than Honey by Swiss director Markus Imhoof. The film explores the reasons for the dying off of bees around the world.

Scientists have compelling evidence that insecticides called neonicotinoids have a disastrous effect on bees. Insecticides along with invasive parasites and a decline in the quality of bees’ diets should give us cause to be alarmed. Perhaps the gravest danger lies in climate change. “According to new research published in the journal Science, dozens of bumblebee species began losing habitat as early as the 1970s, well before neonicotinoids were as widespread as they are today. Since then, largely as a result of global warming, bees have lost nearly 200 miles off the southern end of their historic wild range in both the USA and in Europe, a trend that is continuing at a rate of about five miles every year.”

There are untold articles about the impact this radical decline of our bee population is continuing to have around the world. We should be concerned. The good news is that there are some things we can do to help our honey friends, and in doing so help ourselves.

This article is specifically written to help native Australian bees in our backyard. I love the idea of building bee hotels – what a fabulous project to do with kids as they learn to hopefully be more compassionate and responsible earthlings. Save the Bees is an admirable initiative that rescues and rehomes bee colonies that are in danger – perhaps it something you would like to support? All around the world, concerned humans are taking up the challenge to do their bit in looking after bees – like the bee sanctuary in New York that educates people in creating environments where bees can thrive.

There are many simple things we can do – starting by educating ourselves on this important issue and then turning our newly gained knowledge into action. Let’s bee purposeful in making this beautiful planet a better place for generations to come.

“I have a huge belief in the importance of bees, not just for their honey, which is healing and delicious food, but the necessity of bee colonies that are vital to the health of the planet.” – Trudie Styler 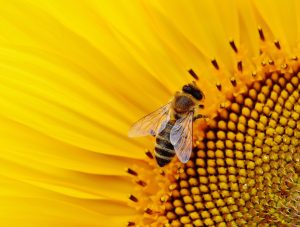