I blogged this piece on Tangier Island back in 2017. As I read it today, I found it helpful and thought I would post it again … perhaps it also finds resonance in your life at this time.

And then one day,
– and I still don’t know how it happened –
The sea came.
Without warning. 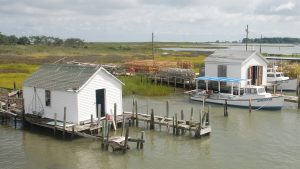 I first heard about Tangier Island from Diana Butler Bass as she shared this interesting story with Rob Bell on one of his podcasts. This remote island in Chesapeake Bay on the Eastern Shore of Virginia is in trouble – it is sinking, and with it a fascinating piece of history and quirky British dialect.

The islanders, who at Tangier’s height numbered around 1,200 people, have dramatically declined to around 400, but are not giving up. Even though rising sea level, a result of climate change, is claiming around 15 to 16 feet of land per year, the inhabitants are building a sea wall to protect the harbour. However, a big storm could easily wipe out all of these makeshift endeavours.

Young people are abandoning Tangier by droves. They head to the mainland for work, study and entertainment. The island council holds to a tightly run moral high ground – no bars, no alcohol, no pool hall, or arcades, and Hollywood’s bid to film “Message in a Bottle,” starring Kevin Costner, was rejected as the script contained sex, cursing and alcohol. For some it all becomes too suffocating. As the population shrinks, the graveyard grows, the tombstones a reminder of the families and people who once made this place a thriving community.

Two churches rule the religious roost on the island; the Swain Memorial United Methodist Church and a newer New Testament non-denominational congregation. The UMC congregation has the longest continuous Methodist class meeting (a type of small group). This group dates to the days of John Wesley and according to Bass are “doing all the right things.” However, amidst everyone doing “all the right things,” the island is still sinking …

I often reflect on the sinking Tangier Island. I wonder what keeps people on the island? Perhaps it is in the frail hope that Mother Nature will change her mind and spare the land? Perhaps to live there one has to adopt a fairly strong sense of denial – “if we can just polish the pews and ‘do all the right things’, we can also pretend that nature has not picked us for a showdown of disaster?” Perhaps there is just a quiet resignation that the “show” must go on, ask no questions, bury your head in the sand? Perhaps it is simply the comfort of the familiar? Perhaps it is the love for the sinking island and its people? Perhaps it’s all of the above? Perhaps the story of Tangier represents all of us in certain seasons of our lives?!

I recall waking up in the middle of the night quite a few years ago. I had one of those “Titanic” moments of enlightenment. The recognition that some of my hopes and ideals were misplaced and I was living a life somewhat incongruent with my values and ethics. Yet it took me quite a few more years to “get off the island”. The island can often represent so much of our history, our belonging, our identity. No wonder we have such a difficult time letting go.

The sinking island can also represent a greater historical global phenomenon. The end of an era, a movement, a social norm and methodology, or even a civilisation. If we consider that our world is so fragile and our modern worship of growth and progress is simply unsustainable, then we are sinking our own island. On the current trajectory of greed and violence, an end of the world as we know it is not just inevitable, it is necessary. Our pleasure-bound consumption, built on the deprivation of our global neighbour, has to sink!

So, friend, take a moment. Think about your life. Think about your immediate and wider world. Is your island sinking? Do I have to be the “truth monster” in your life and tell you that if it is, no amount of “doing the right things” will stop the sea if it has decided to pay you a visit! Sometimes there is a much greater force at work. The first, terrifying step is to lift your head from polishing your pew and admit what you had hoped would go away: “The Island is sinking and I need a whole new set of eyes to look to a different tomorrow.” 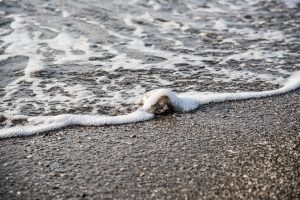 Without welcome, even
Not sudden and swift, but a shifting across the sand like wine,
less like the flow of water than the flow of blood.
Slow, but coming.

Slow, but flowing like an open wound.
And I thought of flight and I thought of drowning and I thought of death.
And while I thought the sea crept higher, till it reached my door.
And I knew, then, there was neither flight, nor death, nor drowning.
That when the sea comes calling, you stop being neighbours,
Well acquainted, friendly-at-a-distance neighbours,
And you give your house for a coral castle,
And you learn to breathe underwater.

3 thoughts on “The Sinking Island”