Skip to content
It is somewhat difficult to find the right words to describe the city of St. Petersburg in Russia. I feel a bit like Alice, who was fortunate enough to tumble down an aviatic rabbit hole and land in this magical place. 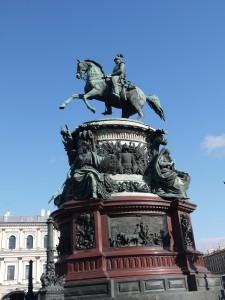 A city of over 5 million people, rich in culture and history, it is hard to believe it is only 300 years old. Founded by Peter the Great, it has caught the imagination of every Russian leader since, and took centre stage during the Russian Revolution in 1917. In 1712, Peter the Great, declared the new city the capital of Russia, displacing Moscow as the seat of government. It remained the capital until 1918, when under Lenin, Moscow was restored to its original primacy. St. Petersburg bore several names: in the 1900s it was called Petrograd, under Lenin it changed to Leningrad, but resumed it’s name of St. Petersburg in 1992. 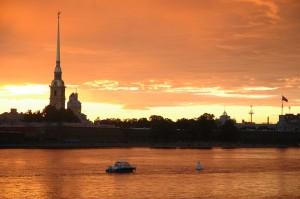 The history of this city is filled with remarkable lives. The founder, Peter the Great, was one of the greatest leaders of the modern world. His wife, Catherine , became the first woman to rule the Russian Empire upon his death. The Romanovs leave an incredible legacy.
When it comes to the world of literature, Russia has produced some of the finest authors and poets of bygone times, and many lived in St. Petersburg: Alexander Pushkin, Nikolay Gogol, Alexander Blok, Anna Akhmatova, Vladimir Nabokov, Joseph Brodsky and, of course, Fyodor Dostoevsky.
Unfortunately, our schedule only permitted us to stay for 3 nights, allowing for 2 days of sightseeing. Anyone planning a visit please note: this is simply not long enough! We managed a short visit to St Isaac’s cathedral, the Church on Spilled  Blood, the Cathedral of our Lady Kazan, and St Peter and St Paul Cathedral. Each of these churches tells a distinct story. Their architecture is breathtaking and if time had allowed I would have loved to just sit and absorb the prayers uttered here through the corridors of time. The visit to these churches was included in a 3 hour city tour – worth every dollar. 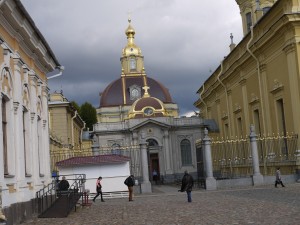 The second day we were met by a new guide; Mr. Michael Fokin, who is a historian, linguist, university lecturer and concerto violinist. A wonderful, intelligent and eccentric man who came alive once he discovered he had two attentive students at his disposal for a whole day 🙂

Out first stop was the summer palace of Catherine the Great. Unfortunately, this luxurious palace is a reconstruction. The first palace was utterly destroyed by the Germans during the siege of World War II – a tragic reminder of the untold number of historical artefacts and buildings annihalated or stolen during the war. Before my visit, I watched the SBS documentary on the Amber Room – most helpful in understanding the story behind this major attraction in the palace. Yet nothing prepares you for the sheer opulence that flows like honey from every available wall space! 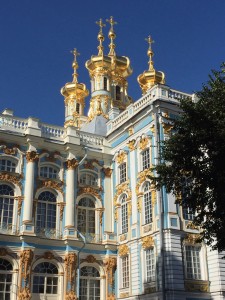 From the palace we negotiated the traffic to the Hermitage Museum. Unless you are a stress addict, do not try to drive in this city, it’s insane.  The museum is the fourth largest in the world, with over 3 million artefacts, including original works of Monet, Picasso, Rembrandt, Van Gogh and Michaelangelo. By the time we reached the French Impressionist section, I was too tired to truly appreciate the beauty of these works and the unique contribution that the Hermitage offered to my favourite art movement. 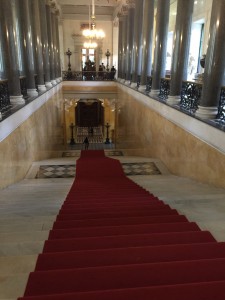 Our day finished with dinner at the A.C. Pushkin restaurant, the very place where the famous poet drank his last cup of coffee before losing his life in a duel with Georges-Charles de Heeckeren d’Anthes. He was very touchy about his honour and this was his 29th duel! 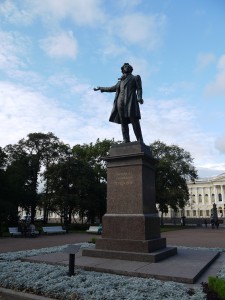 Unfortunately, the time came to say goodbye to this beautiful city and board the train for a 4 hour trip to Russia’s capital, Moscow. I’m very grateful to have the opportunity to visit … and I would come again in a heartbeat! 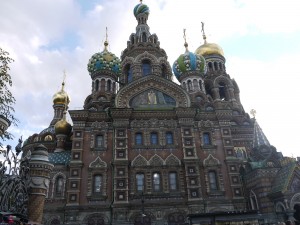 St. Petersburg is a gem of world culture and Russia’s most European city.
– Valentina Matviyenko

4 thoughts on “The Magic of St Petersburg”