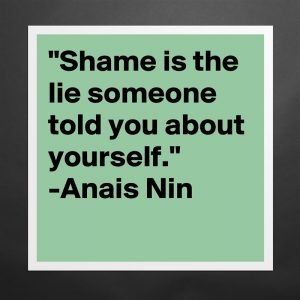 It’s only taken me several decades to work out what a powerful motivator shame has been in my life. As an idealist and dreamer, the need to make things right has so often been driven by an exhausting sense of shame.

Psychologist Michael Lewis calls shame the ‘quintessential human emotion’. In many ways, shame is somewhat of a normal feeling about ourselves and our behaviour. The problems occur when shame or humiliation become an integral part of our self-image and worth. Marilyn J. Sorensen, Ph.D., differentiates guilt and shame as guilt being the feeling of ‘doing’ something wrong, whilst shame is the feeling of ‘being’ something wrong. Gershin puts it this way: “Shame is an inner sense of being completely diminished or insufficient as a person. It is the self-judging the self. A moment of shame may be humiliation so painful or an indignity so profound that one feels one has been robbed of her or his dignity or exposed as basically inadequate, bad, or worthy of rejection. A pervasive sense of shame is the ongoing premise that one is fundamentally bad, inadequate, defective, unworthy, or not valid as a human being.”

Brene Brown would say shame is the unspoken epidemic, the secret behind broken behaviour because shame shuts down vulnerability: “Vulnerability is the birthplace of innovation, creativity and change.” That’s why the fastest way to stifle creativity and pioneering adventures in your organisation is to foster a culture of shame. Shame is a most powerful form of control. When we take a moment to consider our place of belonging, or our social ‘tribes’, that provide not just protection, belonging and nourishment, but also meaning, we realise these tribes tell us not just who we are, but what to believe and how to behave. Shame can become a tribe’s most powerful and degrading tool. Tribal shaming is a dark magic and a form of social control that ensures people do not dare question the status quo because questioning presents a threat to the tribe. If you are anything like me you have been both victim of tribal shaming and perpetrator. Change starts with recognition. 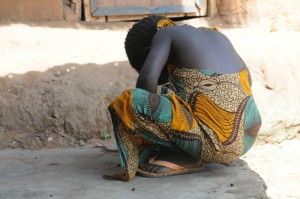 Shame undergirds fundamentalist-type religions, and it is a match made in hell. In these sort of groups, judgement is based on a “goodness vs. badness scale”. A person’s inclusion or exclusion in these groups depends on where they are perceived on this scale. Therefore, to remain in the ‘in’ group of belonging one’s perceived ‘goodness’ is foundational. Acceptance and belonging are extended to those who fit the groups’ philosophical ideals of ‘good’.

1. Always give the impression of being in control of one’s life at all times. This is the cardinal rule of shame-bound religion and relationships – all other rules flow from here.
2. The second rule of shame-bound fundamentalism is that one must always be right and do the right thing according to the laws of the group, especially the leadership.
3. Blaming is vital in ensuring that a person remains above reproach. Blame the other. Blame helps maintain an illusion of control and keeps the system pure.
4. Denial is very important in a shame culture. The person controlled by shame must deny certain feelings, especially the negative and vulnerable ones like anxiety, fear, loneliness, grief, rejection, neediness, and caring. In the shame-controlled family, group, or church, remaining task-focused can keep dangerous inner realities hidden.
5. Unreliability and inconsistency: a shame driven culture can create a person who shines with ‘holiness’ on Sundays and abuses their partner the following day.
6. Incompleteness – resolving hurt and conflict in families or church is not important. Issues can remain unresolved for months and years.
7. And Golden Rule number seven weighs in at ‘Do Not Talk’. Never discuss the disrespect, abuse and shame you feel. To talk about it would be to bring up the past and with that a sense of shame. For religious fundamentalism, this is vital as to talk means to transfer information, and with that power. Ideas about ‘honour’ keep this ‘no talk’ policy in place, along with excusing the shaming behaviour as ‘preserving the integrity of Scripture’ or ‘defending orthodoxy from liberalism’.
8. Last lucky number eight is the rule of disguising shame. Shame-bound behaviour is minimised and outworked in other addictive behaviours.

Boschen concludes with: “Religious fundamentalists are shame-bound persons in shame-based systems. They are guided by a set of rules generally designed by those in positions of power, who require conformity in order to be acceptable.“ 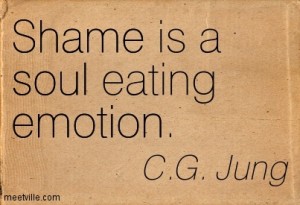 The effect of shaming on children is extremely detrimental. In shame-bound settings, a child’s behaviour reflects directly on a parent’s ideal image or their sense of shame. Therefore, shame is used in turn to modify a child’s behaviour. This is often seen as an acceptable form of ‘discipline‘ in homes or schools, where a child can be reduced to nothing more than their behaviour. Self-concept, the way we see ourselves, is formed in our earliest years by our parents, caregivers and figures of authority. Therefore, if a child is consistently shamed, told they are ‘bad’, ‘naughty’, or ‘sinful’ because of their childish behaviour, this is the perceived reality of themselves that they will take into adulthood.

This blog post is only a tiny tip of the iceberg on this enormous subject of shame that so drastically affects human thought and behaviour. I am still unravelling the role of shame in my own life, especially the years of tightly held fundamentalist philosophies that disguised themselves as ‘pleasing God’. Shame’s need to have it all together only produces hypocrisy and judgement. I am learning to trust grace in a whole new way and rediscovered the words of Jesus, “I have come to give you life, life to the full”.

Shame, blame, disrespect, betrayal, and the withholding of affection damage the roots from which love grows. Love can only survive these injuries if they are acknowledged, healed and rare. – Brene Brown

8 thoughts on “Let’s Talk about Shame”