The blog posts that follow are my contribution to this book.
This is Part 2 … you can read Part 1 (Meandering Paths) here. 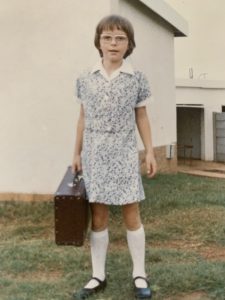 I was “saved” in the Newcastle Full Gospel Church, when my father randomly decided he would go to church, prompted by an invitation from his supervisor at work. A visit by aliens would have been less surprising. I walked down the aisle that Sunday morning and “gave my heart” to the Viking-look-alike-god I encountered all those years earlier. I waited for the magic to happen as I was told I was now “saved” and transformed and a whole new being. In a sense, I did experience magic – suddenly, I belonged to a group of people who smiled constantly and fed me delicious South African desserts. The wandering little girl, now in her teens, had found a home.

Like a woman possessed, I frantically built the structures of certainty and absolutism around my life, following my coming to faith. I embodied the zealous figure of Saint Paul before his conversion, slaughtering any and all ideas that contained seeds of doubt and paradox. Fundamentalism, with its overtures in literalism and dogmatism, became the strong tower that produced my concept of God. I was a loyal soldier to the cause. Finally, I had found something that soothed my angst over what appeared to be a harsh, confusing, and meaningless world.

In the meantime, on the geographical front, we returned to Germany for a year and then migrated to Australia. It was in Rockhampton, Queensland, in 1984 that I would meet the man who would become my life partner. He was travelling up the coast with a friend and dropped in to visit my church, an offshoot of the large Pentecostal faith community called Waverley Christian Fellowship based in Melbourne. His father was one of the ministers there. So, one bright, sunny day in February 1985, I packed up my old Valiant station wagon affectionally called “Boris,” and embarked on the long drive to Melbourne, sleeping at the side of the road along the way. So begins my story of a three-decade-long journey as an integral part of a conservative religious institution and my addiction to certainty.

Kierkegaard was an admirer of Socrates and the Socratic dialectical method. He observed how Socrates would consistently examine a student’s certainty in an area of knowledge because certainty eventually leads to paradox. Paradox provided a pathway to higher truth. Kierkegaard believed that engaging in this dialectical process would offer more valid glimpses of the Divine in one’s journey. This belief, for him, was the only developmental certainty – the trek through the “stages of life’s way.” I found this to be a helpful reflection as I look back on thirty years lived within a conservative Pentecostalism that had little room for questions or paradox. Pentecostalism has a strong emphasis on spiritual manifestations. It tends to resist critique and is at times known for its anti-intellectual stance.

I often wonder why it took me nearly thirty years to wake up in the matrix. I think my internal fear of chaos and confusion collaborated so well with the structural ideologies in a place that refused to question. I do not want to give the impression that these were in any way “bad” years – they were not. I experienced a sense of happiness and fulfillment in the various roles I filled in the megachurch of which my husband would become Senior Minister in 1995. They were heady days of success, expansion, and growth. I developed as a speaker and was travelling the world, delivering profundities from various platforms about everything certain and absolute.

People cheered. I had found truth.

In our structure-building phase of life, we often find safety and solace in organisations that exude confidence and assurance. This includes religious institutions that embrace biblical literalism as a form of orthodoxy. They provide an irresistible framework of certitude for anyone seeking guarantees or formulas that will work in this wild ride called life. Unless we foster a strong culture of critique and self-reflection in these settings, we will mistakenly confuse our flourishing ego as faith and our elitism as a community. With such a narrative, held in place by praise and success, it becomes increasingly difficult to change and grow.

Richard Rohr writes, “The human ego prefers anything, just about anything, to falling, or changing, or dying. The ego is that part of you that loves the status quo – even when it’s not working. It attaches to past and present, and fears the future”(Falling Upwards). My ego had hired my love for certainty and structure as security guards to prevent any ideological challenge or change. Working together with the idea of ‘success’ and applause from the multitude, they dulled my senses – a sort of concoction that has us cling to fantasies and keep us blind.

Maybe that is why I didn’t question hierarchical structures or patriarchal dominance for such a long time?

My love affair with certainty ensured that I obediently nodded to ideas and doctrines that were presented as absolute truth, yet jarred deeply with my values. At least I submitted in the early years when influential leaders would propagate the myth of male headship. However, both my husband and I began to fall down the rabbit hole as we opened ourselves to voices outside our tight-knit community, and the wheels of change began to slowly move and creak. Questions started to arise, often uttered in hushed tones, questions that prodded at some of the communal ideology adopted through the adherence to dogma stemming from the Holiness and Latter Rain Movement.

This was not easy.

However, paradox was calling … and her voice was growing louder … (to be continued) 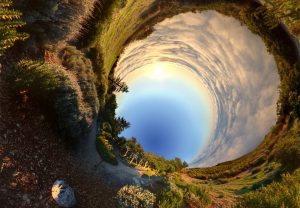