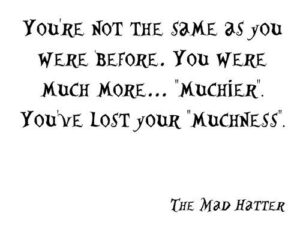 Sometimes, like Alice, I lose my muchness. It sometimes comes under fire and so I hide it.

Have you hidden your muchness much?

These past two weeks I did it again – my much too-muchness was too much for some humans who preferred other humans, especially the She-Ones, not to be too much muchness.

Too much muchness seems to be a superpower of mine. When I look through the many emails/letters I have received over the years, especially those motivated and informed by religious angst, I realise not everyone appreciates much muchness.

I know! It is hard to believe, but there are those who have a whole lot of rules about how much muchness is allowed. I never manage to follow those rules. Do you?

I have found that people can get really angry when you don’t follow their muchness rules and use words like bullets to take aim at our muchness – I think they hope to diminish some of the much of the muchness.

This Celebratory Prose is dedicated to all those whose Much-Too-Muchness has come under attack.

I forgot there were so many of them!

Deceived…
Well-meaning, but…
Good intentioned, but…
Naive…
Problematic…
Too strong…
Too loud…
Too much…
Jezebel…
Wolf…
Presumptuous…
In error…
Unorthodox…
Misleading…
Irresponsible…
Angry!
TOO MUCH!

I gather the Words – all of them
For they were given to me, they are mine, I claim them

Time to make them dance

So I say, ‘Dance, Jezebel, Woman of Fire and Steel’
Too loud, Too proud, Too strong,
WAYYYY TOOOO MUCH
Paint your Eyes and Dance your Angry Dance

And to the She-Wolf I say, ‘Howl, Speak’
Send shivers of Fear down the Superstitious Spines of the Tribal Ideas that tried to Silence you

Dance an Unorthodox Dance
A ‘well-meaning, but’, a ‘good-intentioned, but’ Salsa of Irresponsible Mirth

In exile, Rejoice in your Muchness Freedom
Sing that Unorthodox song that shatters the chains of Shame
Tap your feet and with that rhythm confuse the Elite in their Ethereal halls and bring joy to the children in the streets
Be that Problem for the Presumptuous Assumptions
Celebrate Too Much Muchness

Reclaim the Shame
Give it a coat, Give it a name

Teach it to Dance … this Too Much Muchness …” 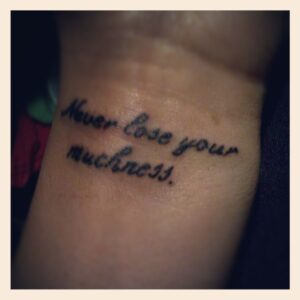