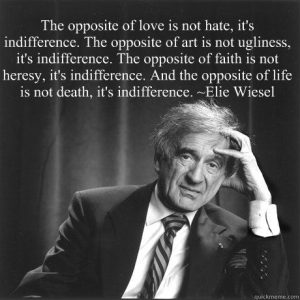 On Sunday, I woke up to several unpleasant realities: Australian politics was in chaos, Pauline Hanson had been returned to power, just like Voldemort, and the world has lost one of its most profound voices of conscience – Elie Wiesel.
Eliezer Wiesel was born to Shlomo and Sara Wiesel, on the 30th September, 1928, in Sighet, Transylvania, now part of Romania. Elie’s life evolved around family, community and religious study. He had three sisters. His mother encouraged him to study the Torah and Kabbalah. Elie was deeply influenced by his father’s liberal expressions of Judaism. He spoke Yiddish at home, but also learnt Hungarian, Romanian and German.
When Hungary annexed Sighet in 1940, the Wiesels, like many other Jews, were herded to the ghettoes. Then in May, 1944, they were deported to Auschwitz-Birkenau, by the Nazi Regime. Elie was 15. He ended up in a sub-camp, Auschwitz III-Monowitz, with this father. They worked at a nearby Buna rubber factory. The conditions were hellish – starvation, beatings and despair, were all part of the daily routine. 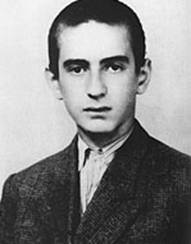 – Elie at 15 years of age. –
In 1945, the Russian Army drew near and Elie and his father were hurriedly evacuated to Buchenwald. Three months before the camp was liberated, his father was beaten to death by German soldiers. His mother and younger sister, Tzipora, also lost their lives there. Buchenwald was liberated in 1945. Elie and his two sisters, Beatrice and Hilda, were the only survivors from his whole family. 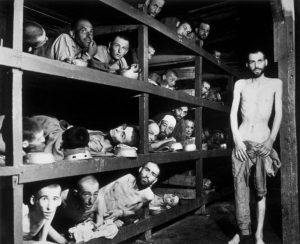 – Victims of the Buchenwald concentration camp, liberated by the American troops of the 80th Division. Amongst them is Elie Wiesel (7th from the left on the middle bunk next to the vertical post (Photo by H Miller/Getty Images) –
How do you begin to put the pieces of a life, gutted by violence and horror, together again? Very, very slowly. It took Elie ten years to begin to articulate some of his experiences in the death camps. Before that, he had studied in Paris and was a journalist for the French newspaper, L’arche. It was through the encouragement of Francois Mauriac, that Elie began to write about life in the death camps. His memoir and first book, Night (La Nuit), has become one of the most critically acclaimed of all Holocaust literature.
Night is the first in a trilogy – Night, Dawn, Day. The trilogy clearly illustrates Elie’s journey from darkness to light, according to the Jewish tradition of beginning a new day at nightfall. “In Night,” he said, “I wanted to show the end, the finality of the event. Everything came to an end – man, history, literature, religion, God. There was nothing left. And yet we begin again with night.” It is one of the most devastating accounts of the Holocaust. A young boy’s struggle for survival brings the senseless murder of millions shockingly close. Reflecting on his feelings upon arrival in Auschwitz he writes:
“Never shall I forget that night, the first night in camp, which has turned my life into one long night, seven times cursed and seven times sealed. Never shall I forget the smoke. Never shall I forget the little faces of the children, whose bodies I saw turned into wreaths of smoke beneath a silent blue sky … Never shall I forget these things, even if I am condemned to live as God Himself. Never.” 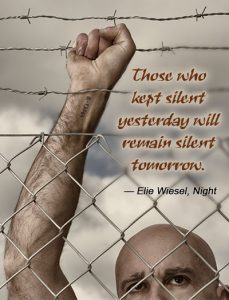 Elie became an American Citizen after an accident left him unable to renew his French documents – documents which previously had allowed him to travel as a ‘stateless’ person. He settled in New York and became an increasingly prolific writer, authoring over thirty books. In 1978, he was appointed chair of the Presidential Commission on the Holocaust. He dedicated his life to the plight of persecuted people groups and ensuring that no one would forget what happened to the Jews. He was the recipient of the Nobel Peace Prize in 1986. He was also honoured across the world with a number of awards which included the U.S. Presidential Medal of Freedom and the French Legion of Honor’s Grand Croix.
Elie and his wife, Marion, founded the Elie Wiesel Foundation for Humanity to “combat indifference, intolerance and injustice” throughout the world. They had one son, Elisha.
A timeline of Elie’s remarkable life can be viewed here. He died on July 2, 2016, in his home in Manhattan, at the age of 87.
Elie Wiesel had a profound influence on my life. His book, Night, shook me to the core and I would recommend it as a must read for all who are serious students of human rights and the Holocaust.
I will finish this tribute with an excerpt from another of Elie’s masterpieces: the speech he delivered for Bill Clinton’s Millennium Lecture Series at the White House on April 12, 1999, entitled “The Perils of Indifference”:
“Of course, indifference can be tempting — more than that, seductive. It is so much easier to look away from victims. It is so much easier to avoid such rude interruptions to our work, our dreams, our hopes. It is, after all, awkward, troublesome, to be involved in another person’s pain and despair. Yet, for the person who is indifferent, his or her neighbor are of no consequence. And, therefore, their lives are meaningless. Their hidden or even visible anguish is of no interest. Indifference reduces the Other to an abstraction …
In a way, to be indifferent to that suffering is what makes the human being inhuman. Indifference, after all, is more dangerous than anger and hatred. Anger can at times be creative. One writes a great poem, a great symphony. One does something special for the sake of humanity because one is angry at the injustice that one witnesses. But indifference is never creative. Even hatred at times may elicit a response. You fight it. You denounce it. You disarm it …
Indifference elicits no response. Indifference is not a response. Indifference is not a beginning; it is an end. And, therefore, indifference is always the friend of the enemy, for it benefits the aggressor — never his victim, whose pain is magnified when he or she feels forgotten. The political prisoner in his cell, the hungry children, the homeless refugees — not to respond to their plight, not to relieve their solitude by offering them a spark of hope is to exile them from human memory. And in denying their humanity, we betray our own.
Indifference, then, is not only a sin, it is a punishment.”
May we take a moment to consider this dire warning from a man who has seen some of the greatest horrors that this world can hold.

RIP Elie Wiesel – You have run a great race.

2 thoughts on “A Tribute to Elie Wiesel”