“ … for there is nothing heavier than compassion. Not even one’s own pain weighs so heavy as the pain one feels with someone, for someone, a pain intensified by the imagination and prolonged by a hundred echoes.”
– Milan Kundera, The Unbearable Lightness of Being
Empathy. A word flung around in many contexts today. It is the
experience of understanding another person’s condition from their
perspective. It is the ability to imagine what it is like to walk in someone else’s shoes. It is feeling what the other person or people are feeling in their circumstance. Empathy is all about seeing the other.
Empathy enables us to see ourselves in the other. When someone
stumbles and falls in public, we see their pain and embarrassment, and rush to help them. Empathy sees the other. It imagines their narrative and this moves one to action.
The opposite of empathy is the need to protect ourselves from
‘the other’. De-personification enables us to treat the other as an object (‘objectification’), without having to consider their needs or feelings.
Objectifying is fed by fear and a need to protect: to protect ourselves, our ideals, and even our religious beliefs. It may be towards those we don’t like, the perceived ‘out-group’, the disadvantaged and marginalised, or those considered as ‘enemies’. When we objectify, we create a sanctuary for our cruelty, apathy or neglect.
Currently, our government continues on the historical road of objectifying asylum seekers. It is hard to imagine that we are at this moment protesting a government’s decision about thirty-seven babies born in Australia, and their families, being sent to Nauru – a camp-like environment that doctors, lawyers and welfare workers consider harmful to anyone, let alone vulnerable children. The deafening sound of silence from many Australians, even some Christian lobby groups that claim to have children’s best interest at heart, is a result of a successful objectifying campaign, complete with altered terminology like ‘illegal maritime arrivals’. The difference between empathy and objectifying is in the
language we use to describe others, as history has demonstrated over and over again. 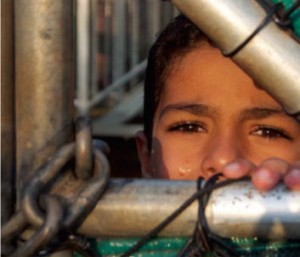 It takes courage to act on empathy. To truly see the other often means that tightly held tribal laws have to be severed in order to walk and stand with the other. When these tribal laws are contained in religious dogma, the belonging of an individual, and a fear of ‘displeasing God’, it suddenly gives clarity to the perplexing issue of why some religious folks, claiming to believe in a loving God, can be so utterly cruel to those who do not hold to their beliefs.
To see the other means we have to make a choice. A choice to relinquish our power. A choice to relinquish a tightly held position in the ‘inner group’. A choice to believe that love is greater than fear. A choice to seek to understand the belief systems of others, without feeling threatened by them. A choice to let go.
To truly see the other we have to begin to understand and respect the image of God in everyone we meet. Empathy begins when we recognise our own humanity in that of the other. We begin to truly see the other when we wake up from a matrix of tightly held ideas, which we have often uncritically ingested out of a need to protect ourselves.
Empathy says, “I see you.”